The overview page contains a summary of all regions found in all records/contigs within the input given to antiSMASH. 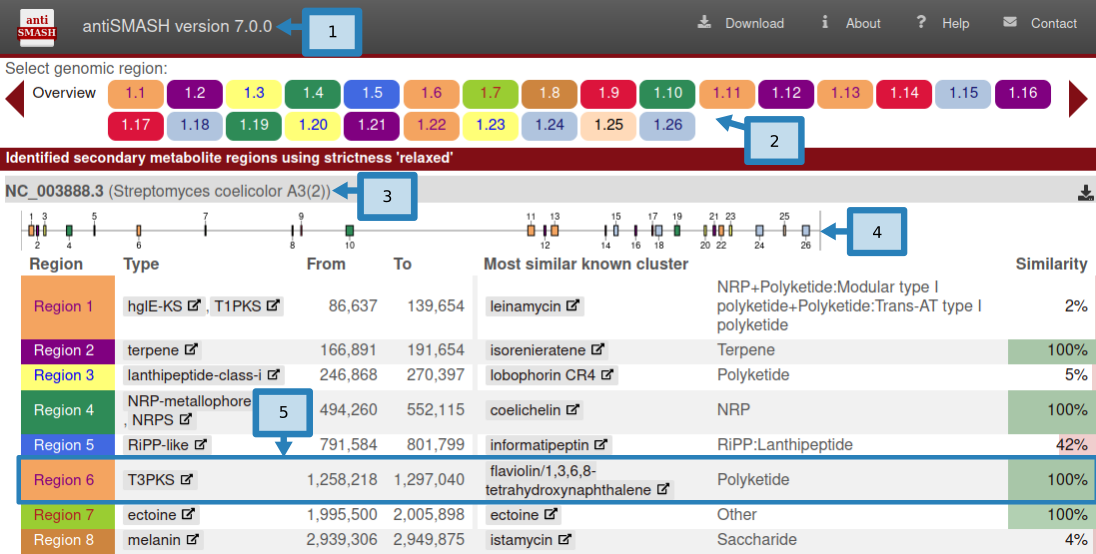 At the top left of the page is the antiSMASH version information (1). Direct comparisons between antiSMASH results should use the same version for consistency, as results can change between versions.

At the top right of the page are ancillary links that may be useful. Download allows you to download various parts of the results. About links to information about antiSMASH (including publications). Help links to these documentation pages. Finally, Contact links to a page with a form to send feedback or questions to the antiSMASH developers.

Under the top bar are region buttons (2). These buttons are visible on all antiSMASH HTML pagesand can be used to quickly jump between regions. If a region is being viewed, the matching button for that region will be highlighted. Region buttons are in the form X.Y. For example, 5.7 would be the seventh region within the fifth record. Region buttons are color coded by predicted secondary metabolite type. Clicking the Overview button will bring you back to this page.

The last two columns containing comparisons to the MiBIG database will only be shown if antiSMASH was run with the KnownClusterBlast option.

Clicking anywhere in the row that is not already an external link will take you to the detailed results for that region.

Currently, there is no good method available to accurately predict gene cluster borders based purely on the submitted sequence data (with the exception of the CASSIS algorithm, which is able to detect co-regulated genes in fungal genomes). In antiSMASH5, the display of gene clusters change to reflect the fact that the BGC borders are just offsets defined in the cluster detection rules, we renamed the highest level that is displayed to “Region”.

How are antiSMASH 5 regions defined?#

In the first step, all gene products of the analyzed sequence are searched against a database of highly conserved enzyme HMM profiles (core-enzymes), which are indicative of a specific BGC type. In a second step, pre-defined cluster rules are employed to define individual protoclusters encoded in the region. These make up a core, which is extended by its neighbourhood, which constiutes of genes encoded up- and downstream of the core.

Here is an example of a rule for detecting a protocluster for a type I PKS:

Whenever antiSMASH finds a gene coding for a protein that has as PKS_AT domain and a PKS_KS domain of various sub-types, a new “Type I PKS protocluster” feature is generated within the region; this feature comprises the core gene-product(s) that trigger the rule (i.e. the PKS encoding genes and extends the neighborhood to the left and right of the core genes by 20 kb to the left and right (as defined by the EXTENT parameter in the rule definition). The values for the different cluster types are empirically determined and generally tend to overpredict, i.e. included also adjacent genes. After the protocluster features are assigned (note: there can be multiple protocluster features within a single region), they are checked for overlaps (as defined by the CUTOFF parameter) and are grouped into several types of candidate clusters to reflect the observation that many BGCs actually comprise several classes of biosynthetic machinery. For example glycopeptides like vancomycin or balhimycin (shown) are synthesized via NRPS, but also contain a type III PKS as a precursor pathway.

Thus, the displayed region contains the NRPS protocluster (green bar) and a T3PKS protocluster yellow bar. As their neighbourhoods overlap, they are assigned to a candidate cluster. 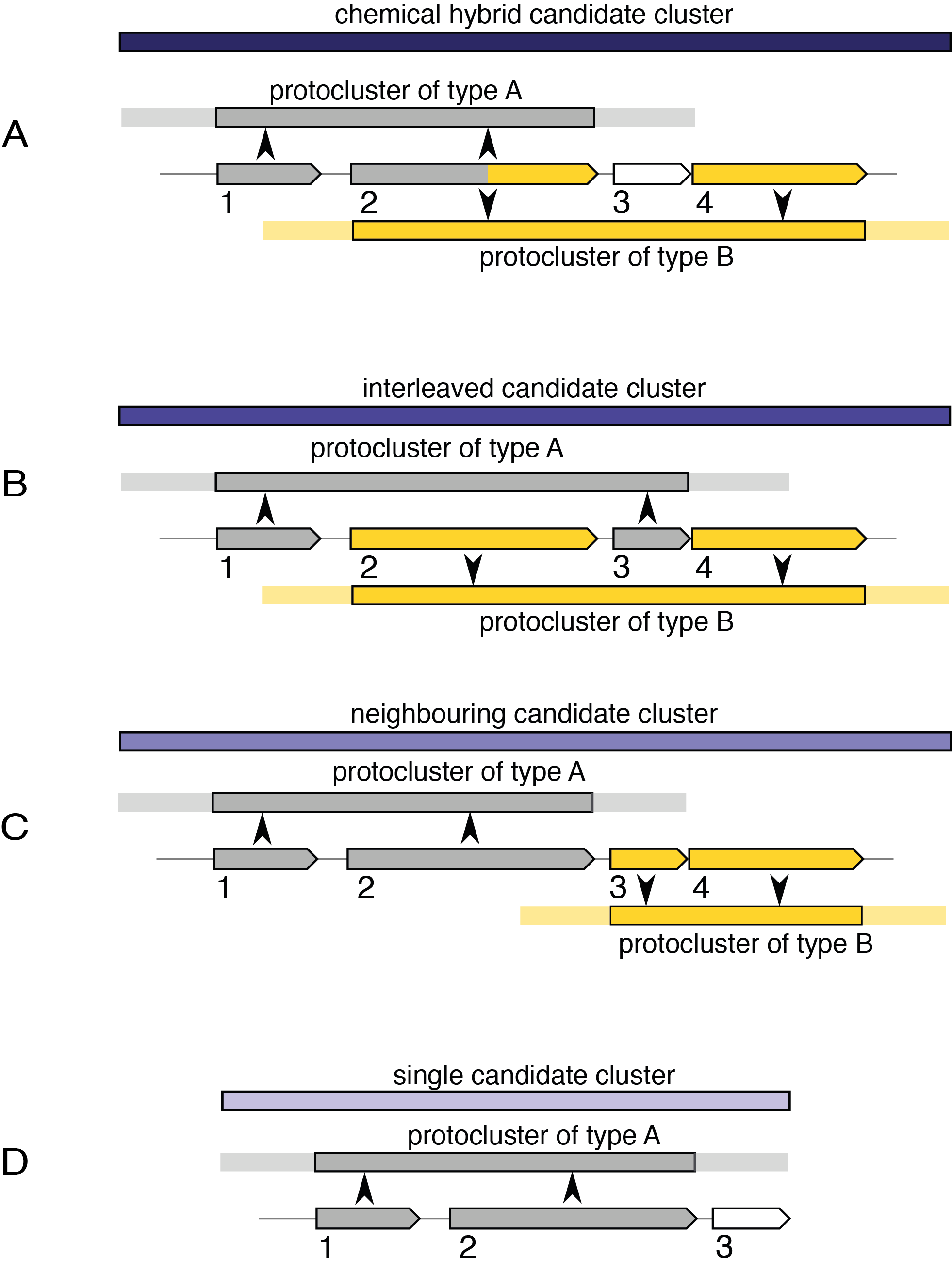 These candidate clusters contains protoclusters which share cluster-defining CDS/genes/gene products. They will also include protoclusters within that shared range that do not share a CDS, provided that they are completely contained within the supercluster border. For example, case A in the image above.

These candidate clusters contain protoclusters which do not share cluster-defining CDS features, but their core locations overlap, e.g. case B in the image above.

Clicking the gene will provide more information on the gene: its annotation, its smCOG (secondary metabolism gene family), its location, and cross-links specific to that gene.

In the middle panel, "Detailed annotation", you can find more in-depth information on the selected gene cluster. For predicted modular polyketide synthase (PKS) and/or nonribosomal peptide synthetase (NRPS) proteins, you will find the domain annotations.

Clicking on a domain image will prompt more information to be displayed, such as the name of the detected domain, its precise location, any substrate specificites predicted, and a link to run Blast on the domain. For predicted Lantipeptide clusters, the predicted core peptide sequences of all identified prepeptides is displayed. A list of detected domains can be found here.

The tab "Homologous gene clusters", displays the top ten gene clusters from the internal antiSMASH database that are most similar to a detected gene cluster, visually aligned to it. The drop-down selection menu can be used to browse through the gene clusters. Genes with the same colour are putative homologs based on significant Blast hits between them. Similar information is provided in the "KnownCluserBlast folder", which detects BGCs included in the curated MIBiG dataset. "SubClusterBlast" provides information about conserved operons, which, for example are involved in precursor biosynthesis of non-proteinogenic amino acids. 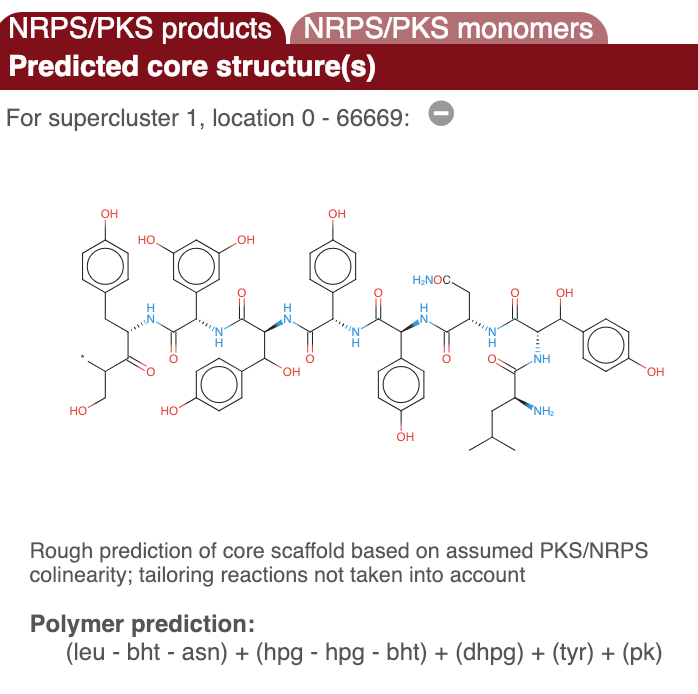 In the upper side panel on the right. "Predicted core structure", a rough prediction of the overall chemical structure of a the product of a detected nonribosomal peptide or polyketide biosynthesis gene cluster is given. The second folder "PKS/NRPS monomers" displays detailed predictions for all monomers. Prediction details are available for multiple methods.

For PKS type II clusters, the side panel shows a list of the predicted starter units along with bitscores, a list of the predicted number of malonyl elongations along with bitscores, the predicted product class, a list of product molecular weights predictions for each combination of starter unit and number of malonyl elongations. Furthermore, it displays each gene/protein that is involved in the polyketide biosynthesis of the cluster. For each gene/protein the type is indicated and for some a prediction of function is displayed. More details on the predictions can be found here.

A chemical structure is displayed for NRPS and Type I PKS metabolites, which is derived by combining the results of the domain analyses.

IMPORTANT NOTE: This is a structure prediction of the core structure of the molecule; it is very likely the final molecule will be different!

In the upper right, a small list of buttons offers further functionality. The question-mark button will get you to this help page. The exclamation-mark button leads to a page explaining about antiSMASH. The downward-pointing arrow will open a menu offering to download the complete set of results from the antiSMASH run, a summary GenBank output file, or a log file for debug purposes. The GenBank file can be viewed in a genome browser such as Artemis.

Results on the public webserver are only kept for ONE month and will be deleted afterwards. It is highly recommended that you download the full result set before they expire.